Lasting Rose » Home » Tony Blair » Why Won’t the Indians Accept Rahul Gandhi as Their Own Obama?

Why Won’t the Indians Accept Rahul Gandhi as Their Own Obama?


I think he (Rahul) is one of the most talented, able and insightful of the younger generation of politicians worldwide, but how he ends up in your politics again, that's for you, for him and for his party to decide. But I think he has got first class mind and great commitment to India. 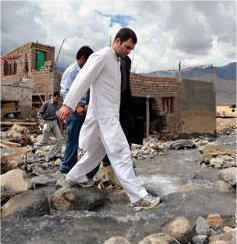 That opinion of Tony Blair, given during a visit to Delhi in 2008 as an ex Prime Minister of the U.K, turned out to be as much intuitive as it was prophetic.

Four years on, Rahul Gandhi has proved his worth as a political leader in his own right and not just as the son of Sonia Gandhi, the president of the Congress Party. He has been favoured as a leader who can take the party to win the next election and foisted by a majority of the Party leaders to the position of the Vice President.

His insightful mind and commitment to his country could be glimpsed from the pathos of his acceptance speech which the Indian media has ascribed as the "Obama moment" of the party. His speech, revealing his personal anguish and hinting a lack of avarice for power, which he could have grabbed anytime he wanted, is seen as a rare one in the Indian politics.

Despite this, why is India, especially its youth, judging from the chatter on the social web and the Indian media, so sceptical and suspicious of the young Gandhi?

Karma - the Indian perception of life.
The reason, perhaps, lies in the Indian perception of life which writes off fellow human beings and their achievements and failures as the reward for the rights and wrongs of past births, something they call Karma. Indians have scant respect, admiration or gratitude for stuff others do in this life and don't care why people behave or act in the way they do.
The tragedy of India is the hollowness of its youth. If only they could stop to think for a moment and look in to the psyche of Rahul Gandhi, who rarely smiles and appears more melancholic than angry, if only they try to look deep in to the make up of his personality, perhaps they could see like Tony Blair did, the making of a great future leader.

Rahul Gandhi - Indian or Italian?
Rahul Gandhi, still a bachelor at forty three, is a young Indian much different from any average youth of modern India. In fact there are many things "Obamasque" about him which a majority of the Indian population fail to grasp. For a start, like Barack Obama, Rahul Gandhi is born with an identity crisis, being born to a Caucasian mother and an Asian father.
A mixed parentage is rare in modern India after the departure of the British. While Rahul Gandhi is an Indian for millions of Indians, for political mileage, he is often depicted as an Italian prince, out to lootIndia's poor. As Obama had discovered, finding an identity must have been truly an excruciating experience for the young Gandhi, with never ending arguments with himself.

Being born in to terror and brutal violence is not for everyone.


"I was taught to play badminton by 2 security guards. Then one day, they killed my grandmother and took away the balance from my life."

A few years later the young Gandhi lost his father in a suicide terror attack and had to live under commando protection ever since. How many of India's young can even imagine growing up like that and still being sane?
Yet Rahul Gandhi had no choice but live through it and endure being ridiculed as an "Amul Baby" by his political opponents.

Coping with the high and low of absolute power
Coping with gaining and losing power is a nightmare for most people. It is almost impossible to imagine having to grow up in the lap of a family which has only tryst with absolute power and tragic death for decades. Knowing one day it may be your turn and live with the thought is nerve wracking enough to drive anyone really insane.

There is no pressure like the pressure of political legacy.
One might say Rahul could have escaped from it all, perhaps by leaving the country. Not an option if you had to bear the immense political legacy of the Nehru family, especially if you had accusation about your late father to disprove and meaningless political murders with no villains to avenge.


The notion of dynasty is actually nasty politics.
A dynasty is something in which sons are anointed or fathers are annihilated for power. The facts are starting from Rahul's grandmother Indira to Rahul; each Gandhi was foisted in to the position of the leader of the Congress party, in tragic circumstances or in the face of political decimation. Yet each of the Gandhi has been accused of dynastic ambition. That is also why majority of Indians can't grasp what Rahul meant when he said in his speech:


"Last night, everyone congratulated me. But my mother came to my room and she sat and cried. Because she understands that the power that so many see is poison. She can see it because she is not attached to it (power)"

All of these should explain why in country in which dynastic politics is the norm, with regional and local politicians practicing it without shame, Rahul Gandhi was seen as a reluctant leader, despite having been given the power on a platter. Chances are you may never see Rahul Gandhi as the Prime Minister of India even if he will win many more elections for his party.
For those who really admire Rahul Gandhi and for those millions who believe and clamor on the social web that everything about him is phony  an attempt to understand the makeup of his persona may be worthwhile.