Americans may not see it because they may not want to. But when it comes to basic human rights at least, the world is coming to see little to differentiate the U.S. from the Taliban it wants to get rid of in Afghanistan. The Taliban thinks women shouldn't go to school; the Americans think 32 million of them shouldn't have a mandatory health cover. What is the difference? 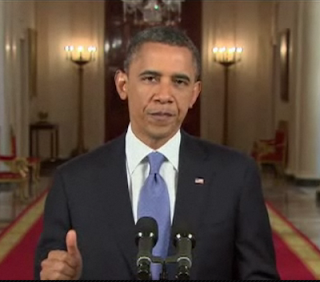 The United States of America may be the richest country in the world without universal healthcare for all, a situation Obamacare (Affordable Care Act) will certainly change. For the rest of the world, with no easy access to facts and figures to compare and who is unaware of the historical U.S reticence towards human rights, the United States of America, which wants to challenge and repeal Obamacare is looking more like a third world country.
That is the take away from the recent Obamacare judgement by the U.S. Supreme court, the dissentand the ensuing political battle cries, all of which have brought the U.S politics and the legal system to world focus, with some disbelief. Hey, is this the America everyone looks up to?

To many foreigners, thanks to its legal system, the U.S. had been the "Never Never Land" which gives shudders down your spine, nearly the same feelings an American family, who is offered a free holiday in Iran, gets in the guts at the thought of a trip.
The general apprehension about the U.S. attitude towards human rights might not be entirely without justification:
• When an Australian citizen seeks asylum in a third world country's embassy out of fear of incrimination and death penalty from a U.S. court if extradited to the U.S.?
• When an ex president of a "friendly" nation with a population of 1.3 billion can be stopped andfrisked at the airport because of his name and racial profiling?
• When a president of the World Bank is handcuffed and thrown in the prison cell overnight withoutrecourse to any legal aid because an illegal immigrant cried foul?
• When recent cases of miscarriage of justice have sent innocent people to the death row which all civilised countries have abolished by now?
• When Guantanamo and stories of renditions are still a reality?
That is to say that there is certainly a 'disconnect' between how the Americans see their justice system from a lot of other people around the world, who are apprehensive, or at least can't understand the way Americans think.
It was not surprising that the entire world, like the President himself, had resigned to the reality and waited for the U.S. Supreme Court, with a conservative majority, to throw the Obamacare, proposed by a democratic administration, in to the bin. That would have been treated as an internal matter and the fate of the U.S citizens.
However, how one judge decided to change history by passing the law has brought the issue to the attention of the world and its scrutiny. Whether Judge Roberts acted to avoid the Supreme Court verses elected representative controversy or out of conscience and a desire to bring the United States of America in synch with the social values the rest of the developed has long since taken for granted has become immaterial.
What gives credence to the question whether the U.S. has really evolved in its human rights view is the vehement and destroying fury of the dissent by the four judges, who have chosen to ignore the human rights implication, in their fervour to uphold the U.S. constitution and the free market.
But what is even more shocking and raises the question if the U.S. indeed cares a toss to be viewed as a third world country is the intransigent politics which has turned the Obamacare, which brings the Americans closer to civilised societies, in to the bone of contention of the next presidential election, with the GOP and its candidate Romney wowing to destroy it at any cost.
Twenty five years back as an immigrant from India in France, I was shocked by a scene when a nearly paralysed lady arrived in a supermarket for her weekly shopping, flat on her back, in a stretcher, being carried by two attendants. That day I had realised what universal healthcare really means in a caring society.
Today, I wonder what would have happened to that person if she lived in the richest country after the next presidential election of the U.S.A.