6 Reasons Why Mamta Banerjee OF India Will Support Pranab Mukherjee For President.

The election for the next president of India is over even before it is due to be held next month. The result is already known. India's Finance Minister Pranab Mukherjee will be the next President. 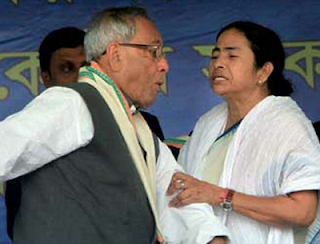 In the Indian democratic system the President is a mereconstitutional head of the country like the Queen of Great Britain and is often unanimously nominated. Only the elected representatives, who are obliged to go by their party's choice, have the power to vote if an election is required. All major parties, except the Trinmool Congress of the West Bengal Chief Minister Mamta Banerjee, have declared their support for the Finance Minister Pranab Mukherjee who is clearly is headed for victory.
Why is then the vote of Mamta, who has so far opposed Pranab Mukherjee, a fellow Bengalee, is important to the UPA and why she will eventually support his Presidency? There are plenty of reasons.


1 Mamta Banerjee is No Body's Fool.

Despite the sycophantic coterie of men without brains Mamta seems to surround herself with, Mamta Banerjee is a lady of substance. Her courage of conviction to fight for her ideals and her ability to not lose those on the way, like Mayavati of Uttar Pradesh, are reasons why Mamta is her own boss. Mamta and the political coalition of UPA she supports surely knows how far she can take her populism without testing the patience or insulting the intelligence of the rest of the country.


2 Mamta Banerjee Is Right about the Prime Minister and the PM Knows It.

In fact, the nomination by Mamta Banerjee of Man Mohan Singh, the current Prime Minister for the post of president, though met with universal ridicule, is the right solution for India. The P.M., in stature and the view of the world, will no doubt be a better a president of India.
Taking a cue from the world cup, Pranab Mukherjee, a political veteran of the congress party, would be a better "defensive" Prime Minister to take the UPA to the next elections and possibly win it; a crucial political decision the manager in Sonia Gandhi missed but what Mamta has inadvertently suggested, in her fury against Pranab Mukherjee.
There is no doubt her respect for the PM was behind her suggestion which many couldn't see but not missed by the P.M himself as is clear from his accommodating gestures towards her party. Mamta must be glad about the growing mutual respect and can't ignore.


3 Mamta Banerjee Knows West Bengal is the 'Greece' of the Indian Union.

Mamta is well aware of the political "hot Potato" of a financially broke West Bengal she is holding and can't drop. She tried her best to get a fellow Bengalee finance Minister to help her juggle around and can't be blamed for being miffed when no help came forth. But Mamta knows Man Mohan Singh's financial wizardry, which he can render without incurring the blemish of favouritism, is her last hope. Mamta Banerjee is intelligent enough to realise why she still needs to politically support the UPA which is the only way forward.

Mamta sure knows how to throw a tantrum, which may be out of her control. Mamta also knows how to turn those in to political drama to her advantage. But like children learn soon, tantrums have a perishable nature and can be overdone. So Mamta shuts up and sulks like everyone else, which is good because now Mamta and others can talk business and find some realistic solutions.

India which is so prone for opportunistic politics without principles is growing politically intolerant to such vagaries of its politicians. A mandate for performance and governance is becoming more and more the pattern. With her ill conceived efforts to forge a new regional power base falling flat on its face, Mamta Banerjee is brutally reminded of the need to keep friends in politics, a lesson why she can't afford to leave the UPA.


6 Mamta Banerjee Knows How To Make and Serve Rasgollas.

Rasgollas, a local dessert made of milk and sugar, is the sweet spot and national weakness of Bengal. Mamta Banerjee surely knows how to make and dish them out, or at least the political version of it, in large quantities. It is the Bengalee national pride both Mamta and Pranab counts on for political survival.
Can Mamta or any leader for that matter afford to hit her vote bank on a sweet spot? You don't have to remind Mamta of all people, herself an artist and personification of Bengalee pride, that she can come across as a spoil sport and deny the simple joy of having a Bengalee President of the country, at her own peril.