Three Reasons Why Two Italian Marines Can Smile While India is Burning. 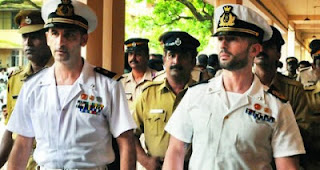 Are the Italians ruling India now? That is what a growing number of Indians start to ask themselves even though there is no government in Rome. However two Italian marine commandos, whose life has been ruined, have reason to smile.

The amazingly plight of two smart Italian naval commandos, Massimiliano Latorre and Salvatore Girone, whose freedom is in peril for doing their duty, has grown from a storm in a tea cup to become the hottest political furore and diplomatic stand off of recent times.

When they fired a few round of warning at an approaching boat, which they mistook for a pirate vessel, they thought they were doing a heroic job while earning a decent livelihood! Surely they would have defied orders even from the pope if they knew what they were getting in to!

They probably knew nothing of the little Indian state of Kerala, the only place still left in the world which believes in the ghost of communism, which turned the death of the two dead fishermen to a worthwhile cause to hammer the political opposition in power.

They certainly knew nothing of the Indian paranoia about all Italians. They had no clue how the fairy tale romance and marriage of an unfortunate Italian girl called Sonia to an even more unfortunate Gandhi scion has turned in to national Italian phobia.

They didn't know that the Somalian pirates, from who they were protecting their ship, don't count in India even if many Indians have been taken hostage or killed by the pirates.

That, it is nearly impossible to shoot to kill from a bobbing ship to accurately hit two fishermen on a bobbing boat and that the boat was listing towards the ship with a sleeping driver, defying warnings by the marines also didn't cut mustard with the Indian public.

So the Italian government had so far put up with the Indian claim of "wrongful" murder of its citizens in its territory and let the Indian police retain the two marines pending painfully long and inefficient judicial process of India.

Diplomatic and other conciliatory efforts had lead the Indian Supreme court to grant bail and permission for the two marines to leave the country for Christmas and more recently for voting in the Italian elections and celebrate Easter. So what has changed now and why the commotion and turmoil in India and the Indian parliament?

The obvious cause of the recent furore is the refusal of the Italian government to send the two marines, who are currently in Italy, back to India to face trial, raising a dispute as to India's right and demanding International mediation.

The ruling UPA bashing power of the shooting incident with an Italian connection, rampantly used by the Indian political opposition during the course of last year, and being ruthlessly used before the elections due in a year, is pretty evident.

However, that, there was political mileage to be made also in Italy was not clear until the high profile Italian rescue kicked in before Christmas, eventually securing bail and homecoming for the two marines.

The pomp and circumstances with which the marines were given a heroic welcome back home, turning a relatively minor incident to a major national issue, whipped up enormous national pride. The national heroic welcome which reflected the sentiments in India defied any signs of electoral campaign, but was part of one none the same. In the confusing political landscape of Italy, it is not clear who was the major beneficiary.

It looks like the same political forces are having a second go at the "national pride" commodity by whipping up and creating a stand off with India, posturing a protective role for the benefit of Italians. The timing, before another round of elections, is what gives the clue, as the Italians could have refused to send the marines back when they visited in December, if it were for the reasons now being bandied.

A raging storm of a major scam, which most likely have political reasons and justifications to surface just before the Italian elections, unfortunately and most inappropriately is also most ill timed for the ruling UPA of India, due to face elections soon.

A major diplomatic stand off, blocking revelations and communications can seriously benefit the two governments. It is mere commonsense to attribute reasons to a foreign country when you can't give explanations and justifications, at least until the elections are over.

Besides diplomatic stand offs, when it creates uproar in the parliament prompting stern warnings from the country's prime minister and creating a huge bump in the media and social web, have an amazing capacity to drown the fall out from major scams in both countries.

Hot potato for the Indian Government.

However, the most ludicrous explanation going the rounds on the social web, yet so plausible is the Indian dilemma of having to make a judgement in the case. Knowledge and cogniscence of the unreasonableness of the case makes the judiciary and the government look ridiculous before an international audience to give a guilty verdict.

On the other hand, the political fall out if the marines go un punished, especially in an election year could be costly in the best of times.

In an year, when the Italian phobia is whipped up by new scams with in India and in Italy, resurrecting old ones like the Bofors, settlement of something like the shooting incident, even by absconding of the culprits can be a blessing in disguise. Chances are both governments have decided to bite the bullet and forget.

In reality, it could be all of these which has put a smile on the faces of the hapless young men, whose life is being ruined by powers they have little control of.