Lasting Rose » Home » Our World » Will Someone Spare Anna Hazare a Copy of “Don Quixote” by Cervantes?

Will Someone Spare Anna Hazare a Copy of “Don Quixote” by Cervantes?


Anna Hazare is playing ‘Don Quixote’ again without reading the novel. If he will care to read, perhaps he will realise the futility of his own actions in his old age.

“Many critics came to view the work as a tragedy in which Don Quixote's innate idealism and nobility are viewed by the world as insane, and are defeated and rendered useless by common reality”

There is none so blind as those who won’t see and Anna Hazare and his team won’t see that their game of “Don Quixote” is not fair on 1.3 billion Indians! 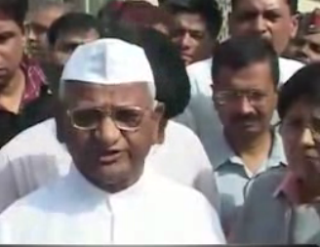 There are striking resemblances. For a starter like Alonso Quijano who adapts the name Don Quixote, Anna who is 74, must have been reading too many books on chivalry (certainly not “Don Quixote”) while all that corruption was going on under his nose for all these years. It is not clear though what has woken him up to the ‘menace’ of corruption he must save his country from, even if he has to give up his life for that!

Arvind Kejriwal, who acts as if he has been secretly offered and aspire to the post of Lokpal of India, fits very well in to the role of the illiterate and gullible Sancho Panza, the squire of Don Quixote, who was offered the post of the governor.

Kiran Bedi, the frustrated and very first woman police officer of the prestigious cadre of , fits in very well as Antonia, the niece of Don Quixote and Prasanth Bushan, the leading lawyer, as the village curate, both acting in advisory roles to Don Quixote.

There are of course several minor characters, Rocinante the skinny horse of Don Quixote and Rucio, the donkey of Sancho Panza included, in the team of Anna Hazare.

Like Don Quixote, Anna and his team, in their wild dreams pick on anything they can which don’t retaliate, to blame for the epidemic of corruption in India while the real causes and reasons lie elsewhere and beyond the combined intelligence of the whole team.

The very notion that corruption is the biggest problem the nation is facing and getting rid of it must be the priority and there is only one way by entrusting a super cop who has the life and death power over 1.3 billion people to do it, all ideas propped up by Anna Hazare and his team, show how close Anna’s hallucinations are to those of Don Quixote.

For one thing, ‘corruption’ is in the vein of Asian culture which is based on spirituality and in pleasing gods by offerings to get along in life. It is in the blood of Indians. An honestly conducted survey among 1.3 billion Indians to find someone who has never been part of a corrupt act in life is likely to draw a blank. But then again honesty is not easy to find.

In fact corruption in has numerous manifestations. Bribery rampant among public servants, capitation fees in education, baksheesh for services, horse trading in politics, and favouritism in government, only to name a few, each with its own causes and remedies if any.

Many of these are natural and unavoidable in a vast nation like , which remained a closed economy insulated from the rest of the world till the nineties when near national bankruptcy forced the government to open the country’s economy to influx of foreign investment.

In reality, while the bribes were considered an ‘acceptable means’ to make up for the measly income in the public sector, the recent surge of foreign funds has aggravated the problems in urban life, exploding the difference between  the haves and have-nots.  This is different from the commercialisation of education, medical and other services. The corporate corruption involving the government is of different nature as well.

In effect, all these can be contained by a Lokpal is not logical. The recent actions by the supreme court sending central ministers to Jail also prove that nothing more than the existing system is required if the government and everyone empowered is willing to act conscientiously without interference or intimidation.

What then is the justification of blaming and picking on a ‘minority’ coalition government, which has tried to give the cleanest governance has ever seen, for the windmill Don Quixote was trying to tilt?

Kejrival’s naming of 14 ministers, based on mere media reports, as corrupt and Anna Harare’s demand that they be sent to jail by August smacks of accusation, trial and punishment all by mere imagination and shows the dangers of an all powerful Lokpal which cannot be acceptable in any democracy.

It is interesting that the ‘real’ politicians who have managed to sabotage the Lokpal bill like Mamta Banerjee or strong men like Mulayam Singh Yadav whose newly elected government has appointed members with criminal background has not been challenged by the new Don Quixote of Indian politics.

Anyone who has listened to Anna Harare’s recent speech also can’t miss the lack of sound reasoning and racist overtones of his backers with a political agenda.

Like Don Quixote, Anna always chooses a nice sunny weekend for his pursuits. It is not surprising that young girls who like the fragrance of the candles looking for a chance to light some are always out to watch and applause the escapades. But it looks like Mumbaikars are busy running their lives and have no time for such madness!

Article first published as Will Someone Spare Anna Hazare a Copy of â€œDon Quixoteâ€ by Cervantes? on Technorati.